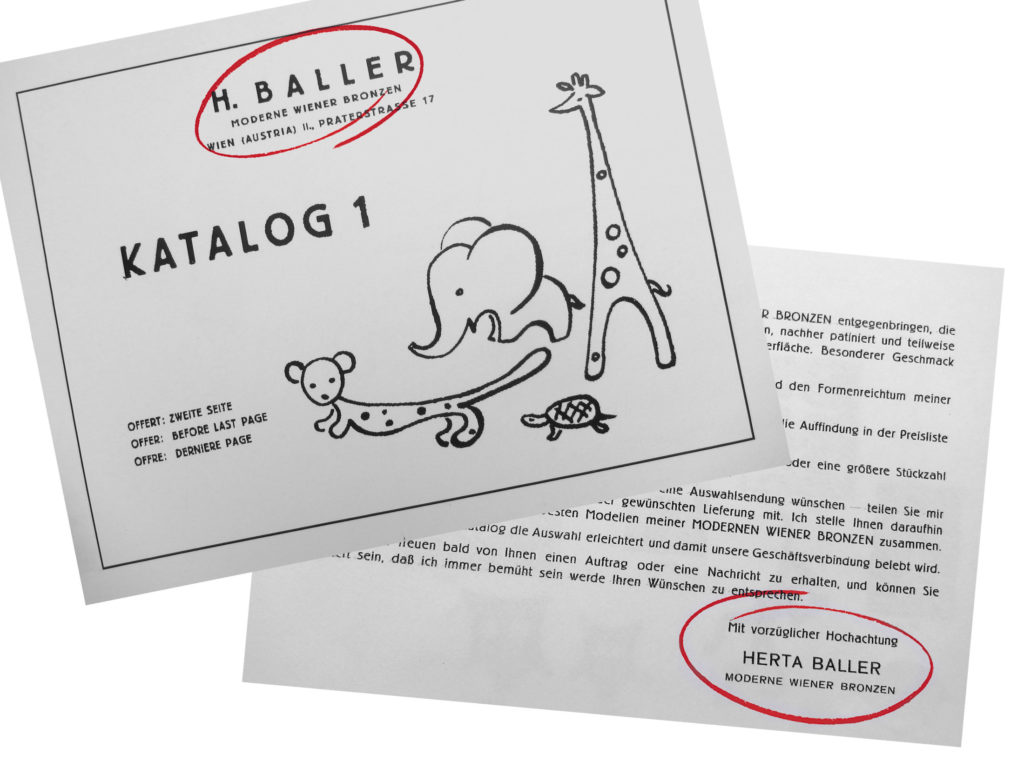 In recent years we’ve began to notice the proliferation of the use of a misspelling, “Hertha Baller”, to describe items made by Walter Bosse and by Herta Baller. So I’d like to clear that up in this post, it’s “Herta Baller” and not “Hertha”.

Normally I’m not sure where things like this originate from, but I can very much remember this rumor/error starting a few years ago. I noticed the phrase “Walter Bosse for Hertha Baller” popping up on some listings on 1stDibs. At the time I didn’t think much of it, it seemed like one seller with some inaccurate info. But now, years later I’ve seen that “Hertha Baller” has taken over quite a number of Walter Bosse listings, and even made its way onto Wikipedia. So I think it’s time to clear some things up. 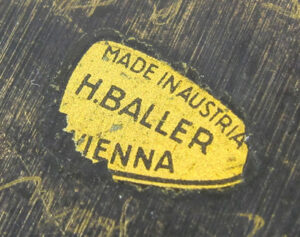 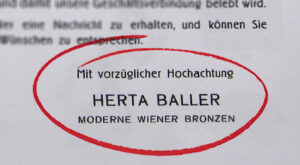 For reference, the above photos show a water decal that was used for a short period of time saying “Made in Austria H.Baller Vienna” and the cover letter page where Baller signs her name “Herta Baller” at the end of the letter in her catalog. 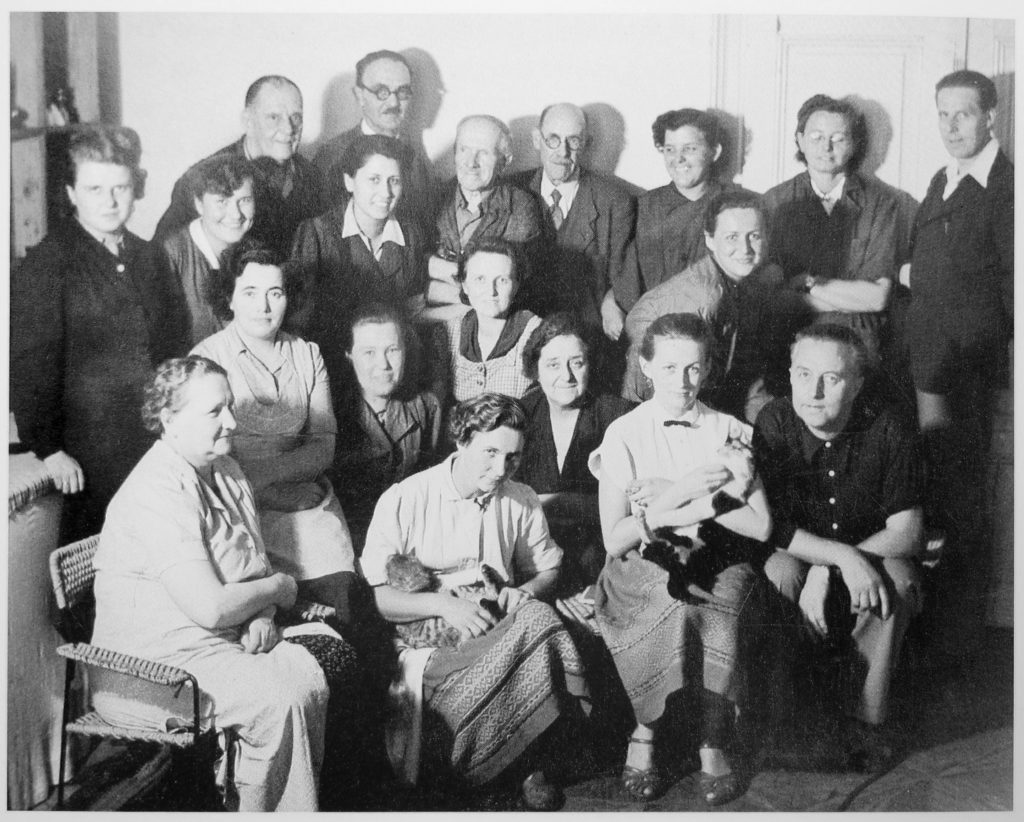 As for the phrase “Walter Bosse for Hertha Baller/Herta Baller”, Walter Bosse did not ever work FOR Herta Baller. For a time, Herta Baller worked for him in the early 1940s. But they had a falling out after he fled debts in Austria for Germany in 1947. He handed over ownership of his Austrian company to Baller with an understanding that if she sold or used any of his designs, that she would pay him a royalty. Those royalties never came because the original shop catalog with all model drawings along with their artist attributions was changed to remove Bosse’s name from all items in production. Herta Baller said that all models that were now on offer in her catalog were solely her designs and therefore she did not owe Bosse any royalties. Their relationship soured after this point.

Walter Bosse had to start over entirely from scratch in Germany, creating a whole new catalog of items. This is why Bosse’s German items look different than items from Herta Baller’s ownership of the Austrian company.

Another common misconception: Herta Baller never owned the rights to nor produced any of Boss’s iconic hedgehog ashtrays. These were developed solely by Bosse in Germany. This is why you never see a hedgehog set with any “Baller Austria” marks on it. No hedgehog ashtrays were ever made by Baller, and certainly not “Walter Bosse for Herta Baller”. 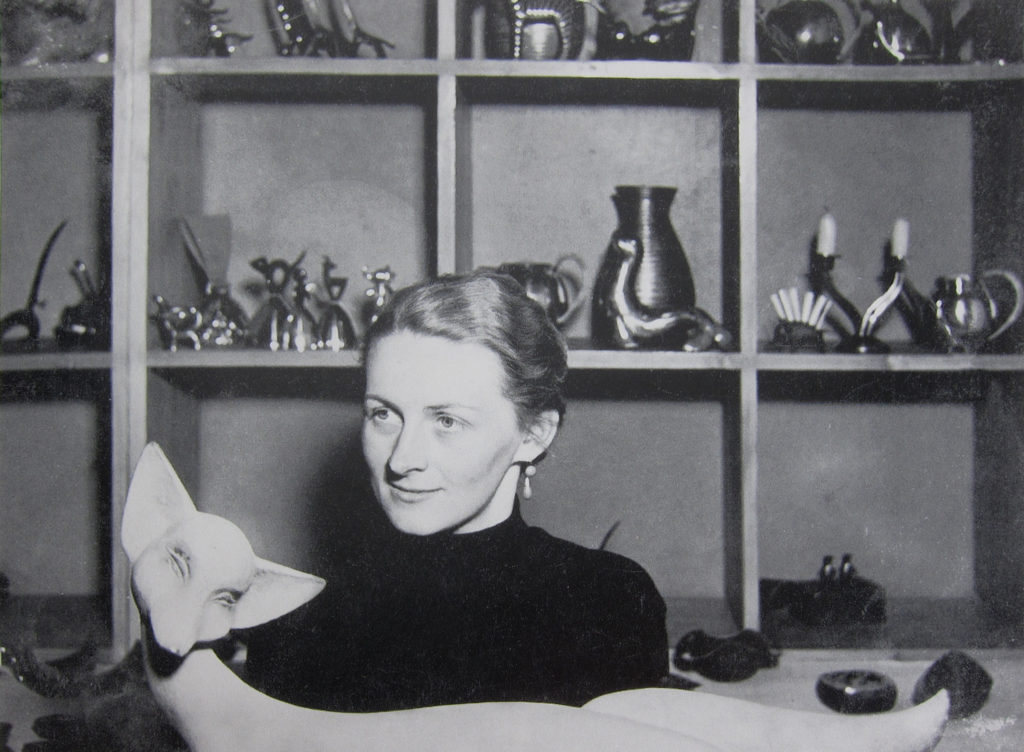 Herta Baller in Walter Bosse’s retail shop, holding a pottery fox. You can see a number of Walter Bosse’s bells, toothpick and candle holders for sale on the shelves behind her.

After turning the Herta Baller owned “Bosse” company around and settling all debts, Baller died at 36 years old on December 1957 of the Asian flu. Hans Waldstätten, who was working as an employee and (according to the commercial register) had the power of attorney, ended up with ownership of the company, running it until the 1980s. 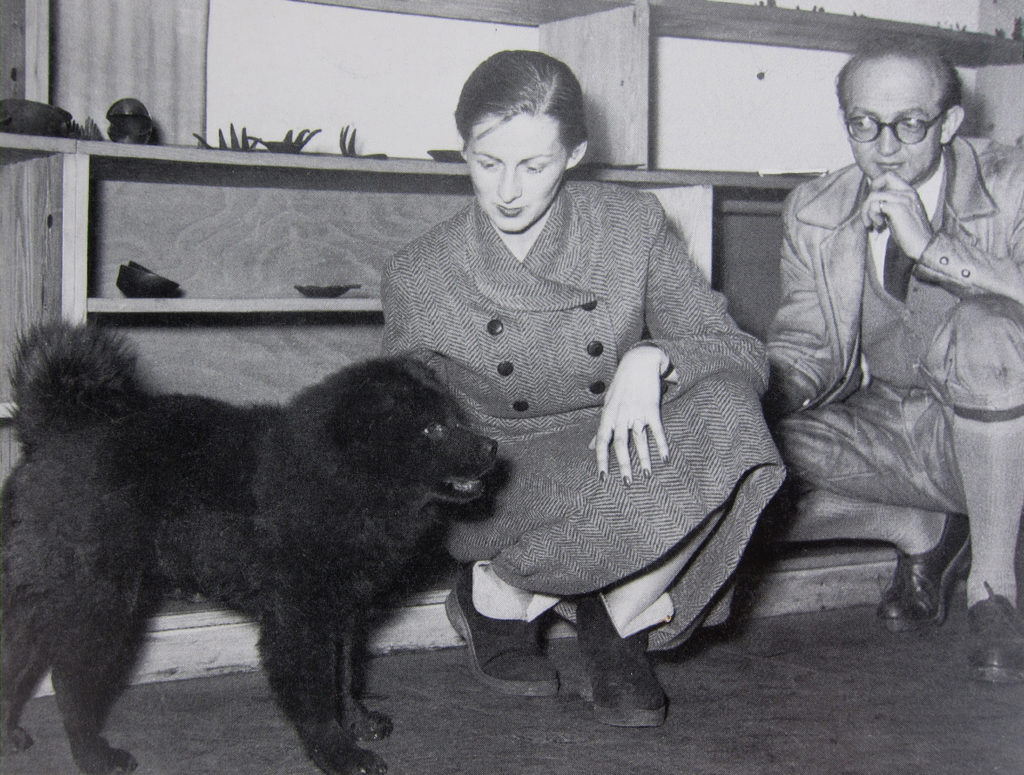 Herta Baller petting a fluffy black dog with Hans Waldstätten in Walter Bosse’s shop. See the hand ashtrays and whale ashtrays on the shelves behind her.