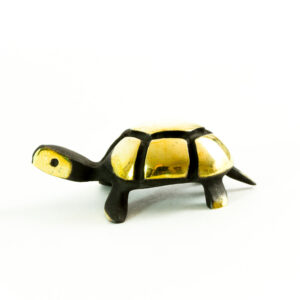 This tortoise is a small creature with big personality! Walter Bosse, an expert craftsman from the golden age of Vienna bronzes, designed his “black/gold” series of bronze figurines to make “as many people as possible happy.” This painstaking reproduction has all of the quality of the mid-20th-century originals, with perfect patina and polished, golden surfaces, like they were originally intended.

Designed by Walter Bosse, circa 1940s.

Born in Vienna in 1904, Walter Bosse was a student of Micheal Powolny, Franz Cizek, and Richard Riemerschmid. He initially worked with ceramic sold by the Wiener Werkstätte, Augarten, and Goldscheider. His designs are some of the most important works in mid-century decorative arts. In the late 1940s Bosse began to produce countless brass miniatures (mostly animal figurines) with which he showed his admiration for the various creatures of nature. With his colleague, Karl Hagenauer, he created several figures inspired by the “zoo” theme. With the uncommon look of the collection, he focused on “making as many people as possible happy.” In partnership with Herta Baller he presented his collection at art fairs in Frankfurt, where he found a large amount of international customers. The “black/gold” interplay between polished and patinated brass was soon known around the world.